Warning: this is an actual Internal Assessment submitted by a student to the IB! Copying sentences or parts of this piece of work will result in failing your IB Diploma programme because of plagiarism! It is an Economics IA Sample (Microeconomics) provided by the IB Economist as an example of what a high-scoring IA looks like. The IB Economist is recognised as the author of this IA. No part of this piece of work may be copied, reproduced or used without prior permission from the IB Economist and providing a link to the original source.

This article is about Ed Miliband’s proposal to freeze prices for energy. Six market giants are complaining that this will make the profits fall and could lead to blackouts.

According to the article the UK’s energy market is dominated by six firms. A market with such competition level is an oligopoly. As it consists of six large firms, they are interdependent: firms have to consider actions and reactions of their competitors. Products in an oligopoly are normally (however, not in electricity market) differentiated. Finally, there are rather high barriers to entry.

The article states that prices in the UK for electricity have been rising the quickest in Europe. Reasons are not mentioned but there could be a few possibilities. Firstly, there is a chance that every firm’s production costs have been increasing. Consider the diagram (for simplicity, a monopoly diagram is used): 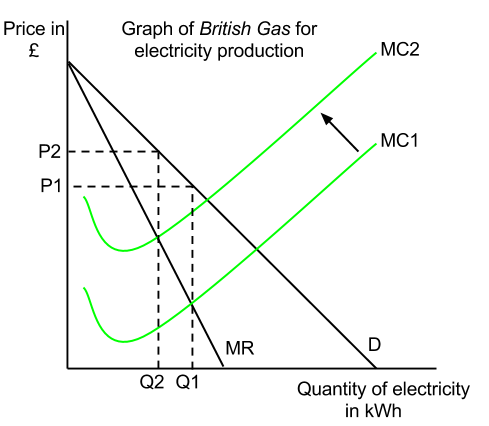 Assume British Gas is producing quantity Q1 where MC1=MR and none of the Big Six are colluding formally or informally. An increase in firm’s production costs means an increase in its marginal costs (MC1-MC2) which are additional costs of producing one more unit of output. After the increase British Gas starts producing Q2 at its profit maximising point where MC2=MR and price increases P1-P2. It is likely that this will happen to other firms in the market as well, because there is no obvious reason for having only one firm’s costs increasing.

Economic concept of “sticky prices” states that firms in such situations should not change the price. It suggests that if a firm increases the price, competitors will not follow and that firm will lose revenue as consumers will migrate to another supplier. However, in the electricity market consumers sign fixed-term contracts with suppliers. Sometimes in order to terminate a contract a fine must be paid. These possible complications2 allow suppliers to increase the price virtually without losing clients. People facing difficulties changing the producer are more likely to pay the extra cost. After a firm notices that competitors have increased prices and consumers did not migrate, it starts to charge more as well. So the prices in electricity market might be increasing due to increasing production costs.

If firms’ costs really are increasing, price ceiling which is the maximum price the producer can charge, might actually hit profits and possibly lead to blackouts. In this case, firms are increasing charges in order to keep abnormal profit maximum. If after the maximum price is introduced the production costs keep increasing, eventually abnormal profits might disappear at all. This could be the reason why firms state that price freeze “<…> will hit investment”. If costs increase above the price ceiling, firms might start making a loss: “<…> could lead to blackouts”. However, this is unlikely to happen as “UK customers pay the 4th highest for electricity <…> although the overall cost to the consumer is 12th”. So in other countries consumers pay less even though the costs of production are higher. Then Miliband’s plan would probably work as desired: it would lower firms’ abnormal profits and offer lower prices for a necessity.

Another reason for rising prices could be the decision of the Big Six to informally collude. If so, the idea to cap prices would not only stop that but also benefit the consumer. Consider the diagram: 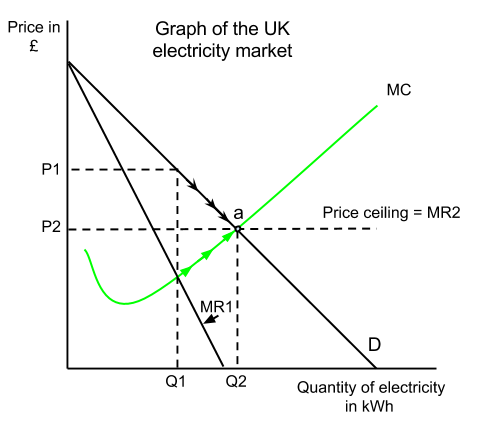 The market starts in equilibrium at Q1 where MC=MR1 and P1. The government sets the price P2. P2aD becomes the new demand curve for electricity. Maximum price (P2) becomes firms’ marginal revenue (MR2) which is the additional revenue from the sale of an additional unit. Normally, price ceiling would cause supply to contract. However, in this situation as firms always produce at profit maximising point MC=MR2 supply and demand extend Q1->Q2. Also, because at quantity Q2, P2=MC, electricity market becomes allocatively efficient. It means that resources are allocated in the way that quantity of good produced is the quantity preferred by the customers.

If the speculation that the Big Six are colluding to fix prices is correct, Miliband’s price ceiling might be a good solution. Firstly, it should stop oligopolies from colluding as they would not have the possibility to increase charges. Secondly, consumers would be protected from oligopolies exploiting their power and putting up the prices. Thirdly, the market would be allocatively efficient. That means that there would be no deadweight welfare loss – loss of social surplus. However, price freeze might lower firms’ abnormal profits. That could negatively affect investments in research and development possibly deterring improvements in efficiency.

Guide on how to sketch diagrams as the ones above