Governments will usually impose price ceilings when they believe that the equilibrium price in the market is too high and undesirable (e.g. weak consumers cannot afford a necessity, etc.). Good examples of markets where maximum prices could be imposed are food and housing. Food is a necessity and in developing countries some people might be unable to afford the quantities required for survival. Hence, governments could impose price ceilings on certain foods. Same with the housing market – if equilibrium rent charged is such that a lot of people are homeless, governments might set a maximum price in the housing market (mostly happens in developing countries) 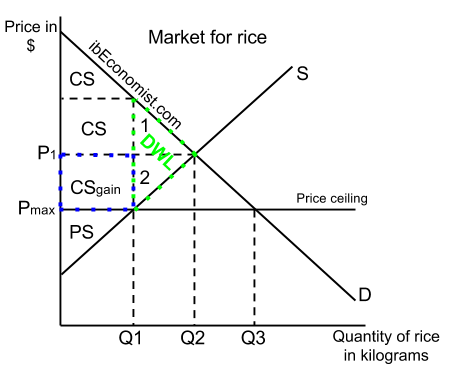 Assume the market for rice stars in equilibrium where supply is equal demand (S = D) at price P1 and Q2. The government introduces a price ceiling at price P max. At this price, demand is Q3 and supply of rice is Q1. Meaning, there is shortage – excess demand of Q3 – Q1. Price ceiling results in inefficient allocation of resources and DWL triangle appears marked by green dotted line.

Yet, parallel (underground) markets (shadow economy) could arise. Since there is shortage, people could start buying and selling the good illegally for higher prices than the set maximum price. This might result in government losing tax revenue as well as other problems associated with shadow economy.