Definition: Unemployment – situation when people who are willing, able and available for work are unable to find work.

Cyclical unemployment can be seen here:

As aggregate demand falls from AD1 to AD2, unemployment increases by the amount Y1-Y2. That is demand deficient unemployment.

On the Labour force diagram, cyclical (demand deficient) unemployment can be shown as follows: 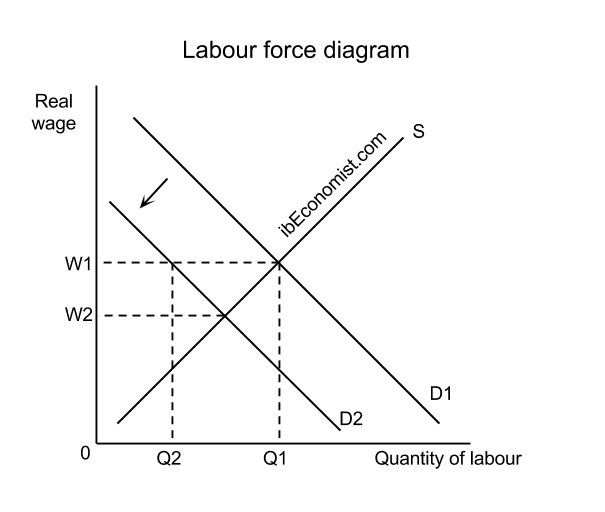 As individual firm’s demand falls, the firm decreases its output. Hence, the demand for labour decreases D1 -> D2. Because wages do not fall, there appears an unemployment of amount Q1-Q2 (the distance between D1 and D2 at wage W1).

Cures for frictional and seasonal unemployments:

There is also Natural Rate of Unemployment – it is also known as the equilibrium rate. Mainly used by Monetarists and is referred to as the rate which exists at the full employment level of income where the AS is vertical. Cure: Supply-Side Policies which would shift the LRAS (Monetarist view) and the vertical AS part (Keynesian view) to the right. 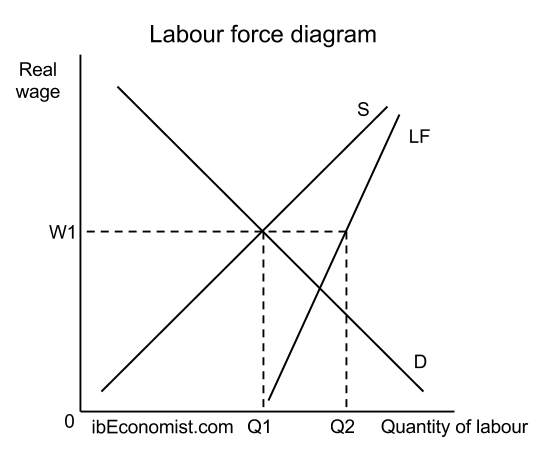 The diagram above illustrates the Natural Rate of Unemployment, it is the Q2-Q1 (distance between S and LF at wage W1). LF in this diagram is the Labour Force – people who are able to work, however are unwilling at a given wage. It is converging to the Supply of labour, because as wage increases people will eventually start to work. In theory, there must be a wage at which everyone who is able to work will be willing to work.