Warning: this is an actual Internal Assessment submitted by a student to the IB! Copying sentences or parts of this piece of work will result in failing your IB Diploma programme because of plagiarism! It is an Internal Assessment Sample International economics provided by the IB Economist as an example of what a high-scoring IA looks like. The IB Economist is recognised as the author of this IA. No part of this piece of work may be copied, reproduced or used without prior permission from the IB Economist and providing a link to the original source.

Link to the article: Anti-dumping duties to cut Turkish flour imports by 50% in July, traders say

The article is about the Philippines introducing a tariff on Turkish flour. This is being done because Turkey’s producers have been accused of dumping – selling their export in Philippines at a price lower than the cost of producing it.

The article states that Turkish flour met “<…> 7 percent of the domestic demand” last year. It is expected to “drop to 3 percent” when import duty is introduced. Let us take a look at how the market for flour will be affected by the tariff, which essentially is a tax on imported goods. 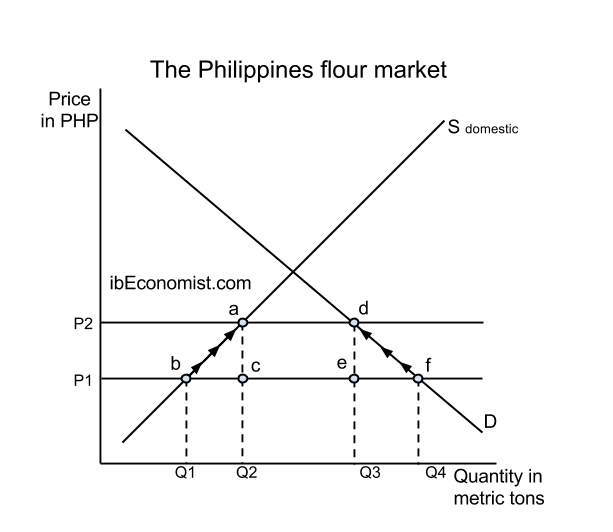 P1 is the world price or the price that Turkish producers are charging. They are able to achieve this price because “<…> leading flour producer <…> Turkey enjoys economies of scale.” In this case it is not dumping. They were able to achieve low production costs because they have been in this market for a long time and developed a lot [in terms of efficiency]. Turkey probably has a comparative advantage compared to the Philippines. They are able to produce flour at a lower opportunity cost which in this case may include using fewer resources which means they have an absolute advantage as well. At price P1 quantity demanded is Q4 and quantity supplied by Philippine producers is Q1. This leaves us with quantity of imports Q4-Q1. A tariff of size P2-P1 is introduced. As a result, demand starts contracting Q4→Q3 and domestic supply extends Q1→Q2. At price P2 (which is P1+tariff) consumers demand Q3 and Philippine producers supply Q2. So the imports shrink by quantity (Q2-Q1)+(Q4-Q3) and now are only Q3-Q2.

To evaluate at this point if the measure of protectionism was a good idea we can take a look at total social surplus. First of all, consumers which are mainly “<…> small bakeries <…>” lost their surplus limited by P2dfP1. Philippine producers gained P1P2ab and government raised revenue from the tariff limited by rectangular adec. So triangles abc and def are deadweight welfare losses, which are social surpluses lost as a result of government intervention due to inefficient allocation of resources in the Philippines.

This tariff on Turkish flour will have an impact on another very important market – Philippine bread market. The article informs: “<…> bread prices are expected to go up by as much 20 percent…”

The market starts in equilibrium at P1Q1. Because of the tariff on flour, bread producers’ costs increase and supply shifts S1→S2. This creates excess demand Q1-Q3 and so price increases P1-P2 and demand contracts Q1→Q2. The demand for bread is likely to be relatively price inelastic as it is a necessity. It is also less price elastic than supply as bread is produced in big quantities, so it is easy for bakeries to add more units to the production. Hence, the incidence of the tariff is bigger on consumers and is limited by P2acP1. Producers pay P1cdP3. That leaves a deadweight welfare loss of abd which was passed on from the previous diagram (it is not additional DWL).

Bread might be a Giffen good which is a product that people consume greater quantities of when its price rises. That is possible because it could take up a large proportion of people’s diets. So they would cut spending on other foods and spend even more on bread. As a result, living standards in Philippines might fall because a larger fraction of society’s income is spent on bread. Smaller amount of money spent on other foods would affect those markets. Possibly, even lead to rising unemployment because less workforce to meet the fallen demands would be needed.

This measure of protectionism might be an advantage to domestic flour producers as they will increase their production (first diagram Q1→Q2). However, if flour supply is relatively price inelastic, which means low responsiveness of quantity of flour supplied to change in its price, then domestic producers might increase their production very little. Turkey’s firms have reached the minimum efficiency scale, which is the lowest level of output required to reach the lowest long-run average total costs. So they are experiencing constant returns to scale and can increase the quantity supplied with a very small increase in price which makes its supply curve perfectly elastic. The Philippine producers have not reached MES and therefore their supply curve is likely to be inelastic. So if supply curve is steeper (less price elastic) in the first diagram, distance Q1-Q2 shrinks and the quantity of imports increases. Then ultimately, the tariff only increased the price of flour, but not the quantity supplied by domestic producers.

Guide on how to sketch diagrams as the ones above