Warning: this is an actual Internal Assessment submitted by a student to the IB! Copying sentences or parts of this piece of work will result in failing your IB Diploma programme because of plagiarism! It is IB Economics IA Sample on Macroeconomics provided by the IB Economist as an example of what a high-scoring IA looks like. The IB Economist is recognised as the author of this IA. No part of this piece of work may be copied, reproduced or used without prior permission from the IB Economist and providing a link to the original source.

Link to article: Bank of Japan to inject 80 trillion yen into its economy

The article is about the Bank of Japan injecting 80 trillion yen into the economy in its attempt to increase inflation.

This injection means the Bank of Japan will purchase government issued bonds thus, increasing the money supply in the economy. Government bonds are held by people, banks, pension funds and possibly other institutions. When those bonds will be exchanged for Japanese currency, money supply in the economy will increase. Most of that money will eventually end up in Japan’s banks. As banks will have more money to lend, they will decrease interest rates. To explain the effect of this policy the diagram below will be used: 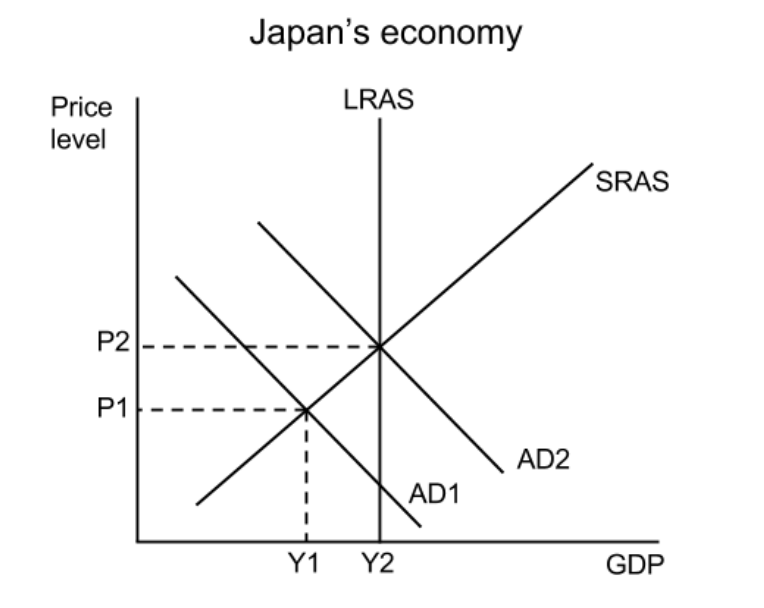 Japan’s economy is now in short run equilibrium at Y1P1 where AD1=SRAS because the article stated: “… Japanese economy is now <…> in its process of getting out of deflation.” When interest rates fall, it becomes cheaper to borrow money and therefore, consumption and investment should increase. Both of them are the elements of aggregate demand – the total goods and services demanded in an economy at different price levels over a certain period of time. Meaning, when they increase, aggregate demand should increase as well, so AD should shift AD1->AD2. Firms respond to growing demand by producing more. To produce more firms demand more labour so unemployment falls and that in turn causes wages to rise. Rise in wages means higher productions costs, thus prices in the economy start rising P1->P2. Eventually, Japan’s economy should end up in long run equilibrium at Y2P2 where LRAS=AD2 with increased GDP Y1->Y2, fallen unemployment and risen price level P1->P2. Hence, this policy should help Japan escape the deflationary gap. Also, increase GDP and decrease unemployment of which both usually are considered positive impacts.

In evaluation, falling interest rates means “hot money”, which is financial capital used by speculators and banks to maximize interest, outflow from the country. That happens because it becomes less beneficial to keep one’s money in a Japanese bank. Yen depreciates: “Japan’s central bank <…> sent yen to a near-seven-year low…” and import prices rise.  Japan is importing some products with low price elasticity of demand which is the measure of the responsiveness of the quantity of a good demanded to a change in its price, for example, oil. The article states “Lower oil prices are expected to bring inflation down…” but depreciating currency might weigh out the effect of falling oil prices. If Japan is importing other goods which are essential for their production, meaning they have low PED, it would increase production costs and cause imported inflation. That would also help the government in tackling deflation.

Also, Japan’s exports should become more competitive as a result of falling value of yen, suggesting that they should rise and increase aggregate demand. If the sum of Japan’s imports’ and exports’ PEDs are one or more, suggesting that the Marshall-Lerner condition is met, that would mean that depreciating yen would improve country’s balance of trade. Balance of trade is the net value of exports and imports of an economy over a period of time. Improved BOT would mean rising aggregate demand which would lead to similar account of events that was explained before.

Money injections causing interest rates to fall also leads to people going from bond to share market because it might offer bigger interest. The article informs: “Asian stock markets all closed higher…” The effect of this phenomena depends on who owns shares in Japan. If shareholders are mainly high income people who have large proportions of companies then they become even wealthier and might not necessarily consume more domestically. Thus, the effect on inflation from this fact would be insignificant. However, if shares are held by a number of low to middle income people, then the domestic consumption might grow causing aggregate demand to increase. That could happen because of wealth effect making people feel richer and hence, more likely to spend.

To evaluate, this policy fails if there is no borrowing. Japan has an ageing population which tends to consume less than a young population and might even be living off their savings, hence, borrowing little to none. This policy also hurts savers as they lose interest on their savings, so they have to save even more. Also, the article mentioned negative real wage growth which could be the reason not to borrow as people are not confident about their future income. So, even if interest rates fall people might not borrow and consume more, hence, the policy would not work.

Guide on how to sketch diagrams as the one above