There are two types of indirect taxes you need to know for your IB Economics course: 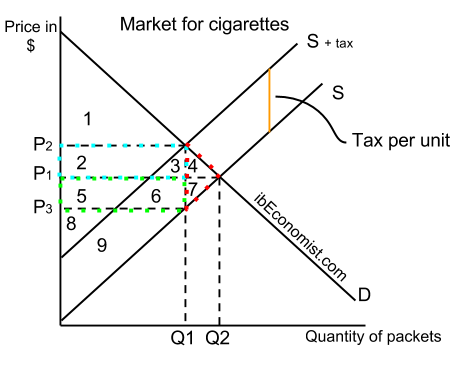 The market equilibrium is at quantity Q2 and price P1 where demand D intersects supply S. Once an indirect tax of size P2-P3 (also represented by the orange line) is introduced the supply curve shifts from S to S+tax. Supply extends and demand contracts until a new equilibrium at quantity Q1 and price P2 is reached. 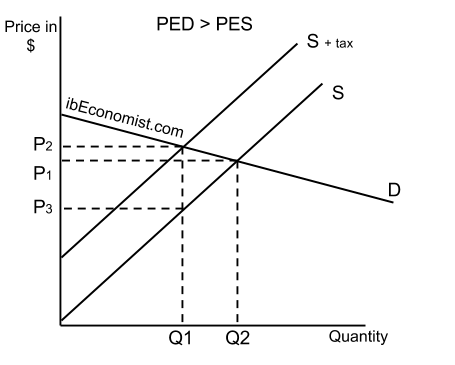 You can see right away that the largest chunk of the tax falls on to the producer, while the consumer pays very little.

If PED < PES (in absolute terms): vice versa – the consumer will pay most of the tax.

The intuitive way to think of tax incidence: PED is probably lower than PES for cigarettes – addicted people might be charged almost anything and the quantity would fall very little. So what would the producers do if they are taxed? Simply put the whole tax on the consumer. Obviously it is the other way around when PED > PES (in absolute terms).

However, it is crucial to understand that you cannot say ANYTHING about the price elasticities of demand and supply when you know the tax incidence. You can only talk about the RELATIVE PED and PES. Consumers might pay the whole tax having a relatively price elastic demand as long as PES is sufficiently more elastic.