The formula for the multiplier:

Essentially, both formulas are the same. Which one you will have to use depends on the information you have.

You have to know:

Also, I remember while preparing for the IB Economics exam there was one question in one of the maths papers. It asked to show the multiplier effect on a diagram (2 marks). 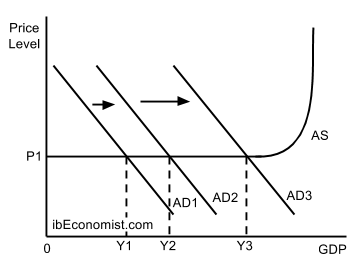 This is how the diagram for 2 marks had to look like. Exactly like that. The second shift in the AD (AD2 -> AD3) had to be bigger than the first one (AD1 -> AD2). Anything different to this (more AD curves, the two shifts being the same size, etc.) would score you 1 mark. However, always consult your teacher on matters like this as it is possible that the question is worded differently. That might change what is given in the markscheme/what the examiner is expecting.