Due to unequal distribution of factors of production it is hardly possible for the market system to result in equitable distribution of income. Even though inequality does provide incentives for businesses to research and improve, the popular opinion is that income/wealth should be redistributed from the rich to the poor. There are different ways this can be done each having its pros and cons. That is the main discussion topic between policy makers – ways and the amount of redistribution. 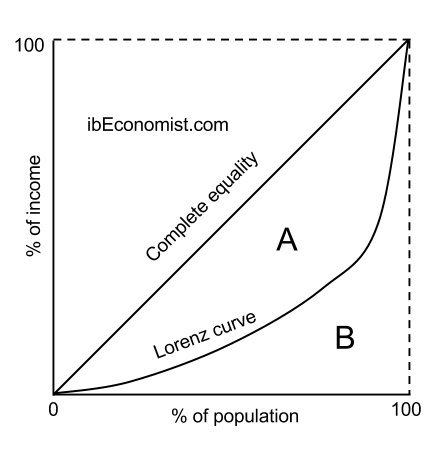 The most popular way of redistributing income is taxation (and transfer payments). There are 2 types of taxes:

Taxes are the first step in the redistribution of income. The second step is for governments to pass on the collected taxes to the poor. That is done using transfer payments which are transfers of incomes from one person to another with no production taking place. Examples of transfer payments include unemployment benefits, old age pensions, child allowances, etc.

Governments can also use the collected taxes to provide socially desirable goods such as free healthcare or free education, infrastructure including sanitation and clean water. That makes those goods/services accessible to low income people which is also promotion of equity.

Relative poverty – standard defined by the average income (required for a lifestyle in a typical society) in a certain country.

You have to know how to calculate the marginal rate of tax and the average rate of tax from a given set of data.