Consider the quota diagram below: 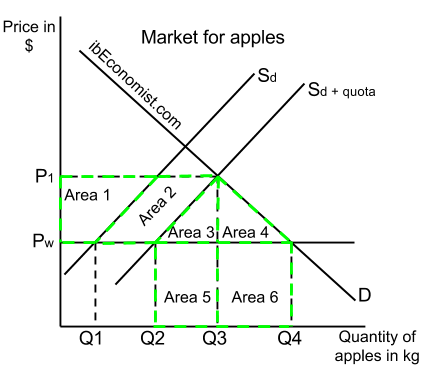 Note: there are different variations of the quota diagram, be aware of this!*

The diagram above represents the market of an economy for apples. When there are no trade barriers, the equilibrium price of apples is Pw and the quantity is Q4. Domestic supply is Sd and domestic producers supply quantity Q1, imports are Q4 – Q1. Assume the government decides to introduce a quota on apples of size Q2 – Q1 kilograms. Then the domestic supply becomes Sd + quota. Domestic supply extends Q2 -> Q3 and demand contracts Q4 -> Q3. Prices increases to P1. The new equilibrium is reached at quantity Q3 and price P1.

Effect of the quota on different stakeholders:

** – after the quota introduction, if you want to consume the same amount of apples as before, you have to spend extra money. Before the quota, that extra money was spent on lemons. Now, you are unable to purchase lemons and are losing that vital Vitamin C! That is a loss of possible higher living standards!

* – this diagram could also be used for analysing the effect of the trade barrier – quota: 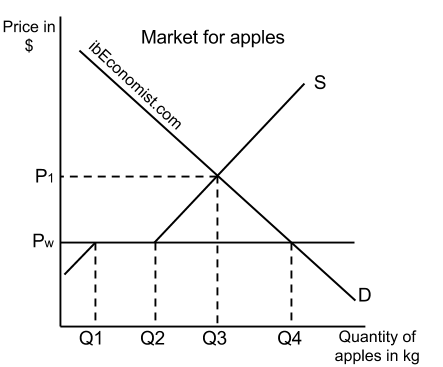