See the diagram below: 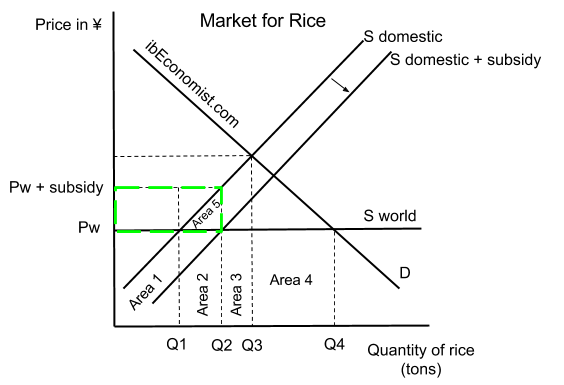 The diagram above illustrates the market for rice in Japan under international trade. When the trade takes place without protectionism, the equilibrium is at the intersection of S world with D at the quantity Q4 and price Pw. At this price, domestic producers supply Q1 and the imports are Q4-Q1. When the Japan government starts subsidizing its producers, the domestic supply curve shifts downwards by the size of the subsidy per unit: (Pw + subsidy – Pw). Domestic production increases Q1 → Q2 and the quantity imported shrinks to Q4-Q2.

Effect of the subsidy on different stakeholders:

P.S. this trade protection could be said to be more favourable than tariff as it does not lead to possible loss of living standards. What we mean is that the price of rice in Japan does not increase and does not make consumers switch to cheaper but less healthy potatoes causing loss of living standards. However, consumers are affected by the government subsidizing producers rather than funding more socially desirable projects. Also, to fund the subsidy, the government might have to increase taxes. After all, residents of the country might actually end up consuming more undesirable potatoes or not having that park built in the city centre as the money went to subsidies.