The law of demand explains why the demand curve is downward sloping. It shows the negative relationship between price and quantity of a good demanded, ceteris paribus. The demand curve shows what consumers are willing and able to pay for a good/service. 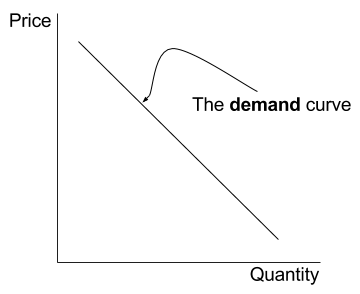 However, it is important to understand the difference between individual and market demands. Let us use an example. Let us say there are two IB Economics students: Tom and Jenny. They both like going for coffee after school to (mostly) procrastinate. We will assume that they both drink regular lattes (even though Tom prefers a skinny latte for some reason, maybe trying to lose weight (???)). Tom says he will buy 1 latte if it’s priced at 2.5$, 2 if the price is 1.75$ and 3 if its price is 1$. Jenny values her afternoon lattes more than Tom and will buy 1 cup at the price of 3.5$, 2 if one is priced at 2.25$ and 3 if a latte is 1.5$.

See the individual demands for Tom and Jenny on a graph: 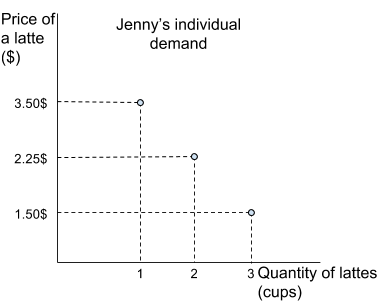 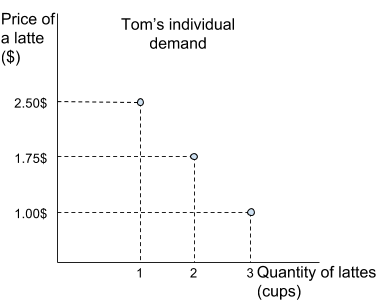 These graphs show particular points of price and quantities. The individual demands are not continuous – they are not curves or lines. You could connect the points in both graphs and it would look like a “curve” but it would not be correct. It is impossible for Tom to buy 1.33 of latte cups if they price were 2.25$.

But looking at the graphs and the information given above, can you tell what would the total demand for latte coffees if Starbuck’s priced them at 2.2$ per cup be? Well you know Tom would buy only 1 cup and Jenny would buy 2, so the total would be 3. If you put the two graphs together, you get something closer to a “curve”: 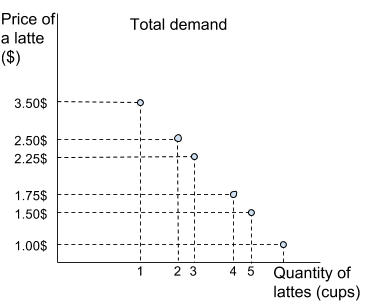 So if you take a 100 or 1000 of similar IB students each one values a latte differently. Someone would be willing to buy a cup for 5$ and buy 10 if one is priced at 1$, others would only buy a single coffee at a price of 1.7$. When you add all those individual points – they make the total market demand. Draw a line through those points and you will get the market demand curve. 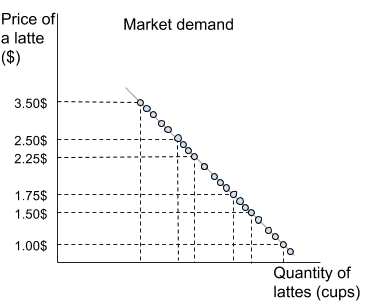 Probably the most important thing to learn and understand about this topic are different changes: 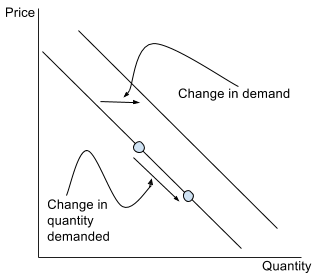 Non-price determinants of demand (factors that shift the curve)

Memorise using this acronym: ICIPASTE
I – Income: income increases -> you have more money to spend -> you buy more ice cream -> demand for ice cream increases! CAUTION! income increases -> you have more money -> you buy less used clothes -> demand for used clothes decreases! The income effect on demand depends whether a good is normal or inferior.
C – Complements: let us say DVD players became incredibly popular (or cheap) again -> a complement of a DVD player is a DVD movie disc -> the demand for movies on DVDs will also increase.
I – Interest rate: interest rate falls -> it is cheaper to borrow money -> you buy more new cooking appliances or a new car
P – Population: population booms -> number of people increases -> demand for food increases as well as there are simply more people demanding food
A – Advertising: a new soap producer begins to advertise everywhere stating their product not only kills germs, but also makes you smarter, better looking and confident -> you and your friends decide to try it out (or never buy it again) -> demand for that soap increases (or decreases)
S – Substitutes: the price of Coca Cola falls significantly -> Coca Cola is a substitute for Pepsi -> the demand for Pepsi will fall as people shift to the cheaper substitute – Coca Cola
T – Tastes and Preferences: it’s 2025 and it has become incredibly “fashionable” to be as “green” as possible -> people start preferring electric cars to diesel/petrol powered cars -> the demand for the electric cars increases
E – Expectations: you expect the price of your beloved canned tuna to skyrocket in the upcoming month -> you begin stacking up on it by buying twice the usual amount -> the demand for canned tuna increases